I have a new bike…

I was hoping to be watching the final episode of “Game of Thrones” tonight, but teenage love life eastenders stuff is happening in the front room so I have instead dragged myself, the laptop and a hot steaming cup of tea out into the garden under the pretence of getting some coding done.

However half an hour later and a second cup of tea later I have done little but trawl through the days Facebook news feed (Chuckling at the Beyoncelogues particularly), So I decided to waste some time more constructively with a quick post here before finally either a) going in and watching GoT, or b) Opening up the editor and get some game written.

On Saturday just gone, an otherwise quiet and uneventful shift at work was brightened up no end with me building and finally taking home my very own Boardman Hybrid Comp 🙂 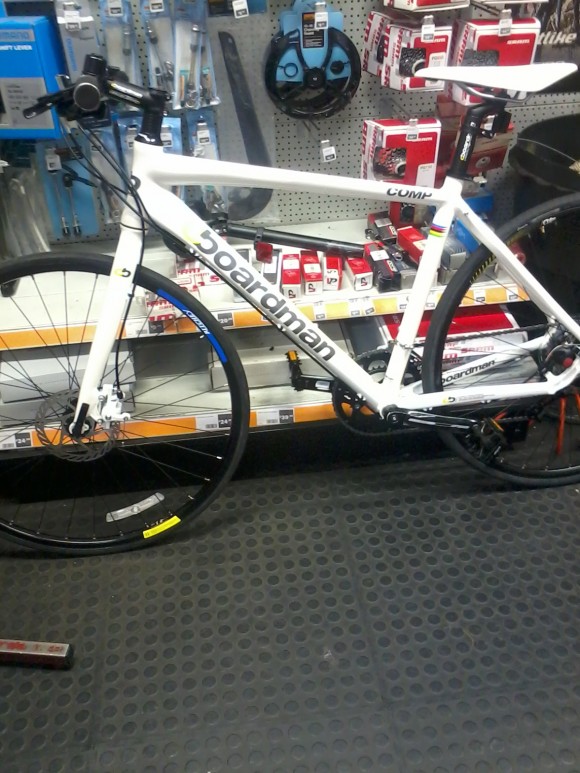 It’s a whole different world away from my trusty Kamikaze, a steel full suspension mountain bike which I bought back in around 1998.  This is fast and uncomfortable, really really fast, and really really uncomfortable.  I’m sure in time I will become more “hardened” to the razor like saddle (or give in and fit a wider and softer one, lol).

My first real outing on it was a quick blat round Lodge lake with Les and Dillon, which was sooo much fun I can’t tell you.  Covered around 4 miles and was surprisingly not as out of breath as I was expecting to be on my return home.

I went out on it this evening as well, another 3 and a half miles or so, the first few hundred metres were absolute hell on my poor ol’ backside.

I hope I have as much fun with this one as I did with the last.