Ok, so day #1 has rolled around and is almost over, and despite my best efforts today hasn’t been anywhere near as productive as I’d hoped. I’m also feeling pretty tired, so it’s not going to be the longest or most involved blog post 🙂

The biggest part of today was spent choosing which models I was going to use from the selection I have previously purchased. This was a fun trip down memory lane, and I was also happy to notice that most (but sadly not all, especially the ones I never got around to buying) of the old FPSC model packs are now free to download from GitHub along with FPSC itself! 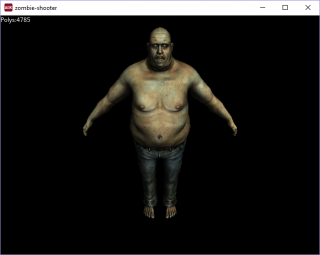 Since this game is being developed with Android phones in mind, I wanted graphics which would look professional but also be low poly enough so as not too affect performance too much.

Eventually, I decided on these two undead monstrosities by Mark Blosser, who are fairly high resolution at around 5000 polys each model. I had to convert the textures to a format AGK2 could work with, but that was no bother. I have kept them at 1024 x 1024 currently, but may reduce them in size to see if that helps performance without impacting the visual appeal too much.

I should point out I have a lower poly/resolution set of models as a fall back in case of performance issues etc, but hopefully I won’t need to use them. 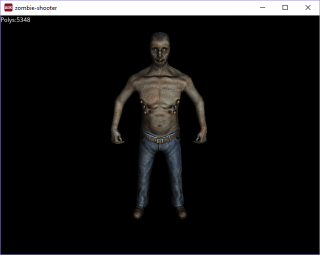 These two Zombies are nicely animated, and look pretty gross, and even come with sound effects! I’m fairly sure that there were a couple more of these available from the old Game Creators Store, as well as a couple of model packs featuring an abundance of zombies both civilian and military. But as this is a project against the clock, I am pressing on with things, I can always purchase and include the other models at a later date.

The models actually come with a lot of unnecessary animations which I should look into removing, as that would (hopefully) decrease the size of the models. 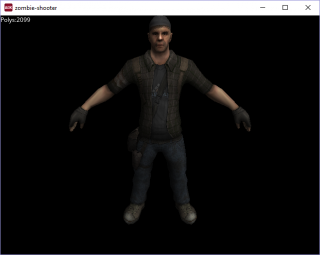 The player gets to choose one of these lucky four people to go up against the zombies. They have been created by Jonathon Fletcher, and I’m hoping to get some buddies to do voices for them (time allowing).

They have a slightly lower poly count than the zombie models, averaging 2500 or so.

They have been designed as civilian militia characters, but I think their appearance suits a zombie apocalypse and that they wouldn’t look out of place in an episode of AMC’s The Walking Dead. 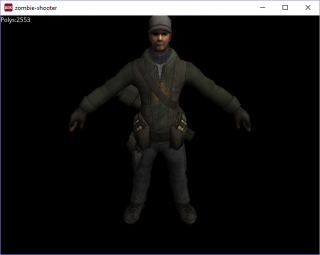 Being FPSC models, they should be fairly easy to attach weapons to (or at least they were in DBP 😛 )

I will be using the weapons from FPSC Model Pack 9 and 10, these include a variety of pistols, rifles, machine guns and melee weapons. And hopefully, a rusty chainsaw and a good ol’ red crow bar (a la Gordon Freeman)

Sadly, the rest of this post isn’t full of images of these four holding a variety of weapons, or even close up poly count images of the weapons because I didn’t quite get that far today 🙁 I have found the files for these though so they are definitely part of the project. 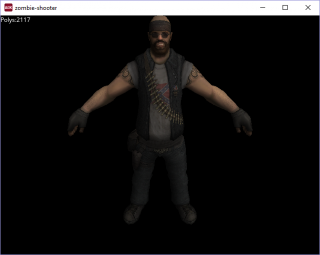 Unfortunately, I also didn’t get chance to realise any of the pen and paper plans I have for the UI.

I have some ideas, and if I don’t have time to create all of the elements I need, or it doesn’t pan out for other reasons then I can always just use semi transparent grey rounded rectangles for UI! Lol!

I did spend some time getting the models to animate, which worked differently from how I remembered in DBP. AGK2 seems to use animation names, and start and end times; instead for frame numbers (which is what I was expecting), Not that it’s a problem, I’m sure I can get around it either with code or by tinkering with the models in blender, but it’s perhaps something to worry about another day. 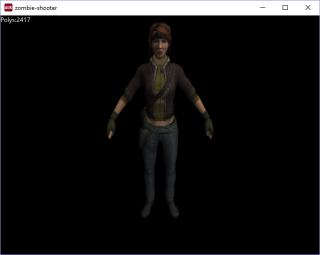 I did also run some performance tests with numbers of Zombies on various test devices. Since I had to retire the Samsung Galaxy Y (AGK2 no longer supports this phones type of CPU), my lowest specced devices are a Galaxy Tab 2 7″ tablet and an iPhone 4S, both of these could reliably display a character and 30 animated zombies and maintain an acceptable frame rate. Sadly with more zombies, it became erratic with the AGK player crashing back to the OS Home page more often than not.

I had to chuckle quietly to myself as I was watching the tests being performed, it really did remind me more than slightly of Michael Jacksons ‘Thriller’ video. (If I had had more time I would have recorded an avi of this, and possibly will do so at the end of the project.) 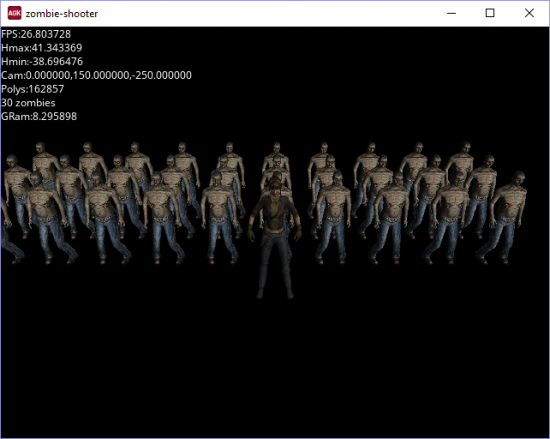 I’m not sure how long tomorrows post is going to be. The only thing on the cards for tomorrow is laying out the code structure, deciding on variables and the like, which will not in anyway make for an exciting blog. I’m hoping that there will be some time leftover at the end to catch up on some of the graphical stuff I didn’t get chance to do today

And with that, I am once again calling it a night. It’s nearly 2am and I really need to go to bed otherwise I will be waking up with a keyboard imprint on my face. Besides, I keep having to make more and more corrections as I type to stop myself sounding like Yoda.